1) Amino acid contains a central carbon atom attached to: an anime group, carboxyl group, hydrogen atom and a side chain

Please find the description below

All amino acids, which are naturally 20 in number have basic parts in common namely: 1) a central carbon atom, also called the alpha carbon 2) a hydrogen atom 3) an amine group i.e. (-NH2) 4) a carboxyll group i.e. (-COOH)

These are the basic parts of all amino acids, however, the difference between the amino acids is found in the series of different atoms called Side chains or R group that attach to the alpha carbon. These R group makes each amino acid specific and different. For example, a side chain containing sulphur (CH3-S-(CH2)2) is the R group of methionine. Each amino acid has a different side chain attached to the basic structure listed above.

Amino acids is made of amino group, a carboxyl group, a hydrogen atom, and a side chain bonded to the central carbon atom.The side chain,and its physical and chemical properties is what makes each amino acid different from the other.

Answer from: elizabethajih99
The amino acids in a protein are bonded to each other with peptide bonds - hence the term for a polymer of amino acids is a polypeptide. There are 20 different amino acids, and they all share the same general structure. In the centre of the amino acidis an assymetric carbon atom called the alpha carbon. I hope that you have a good day and i hope this helps you out

Answer from: danielle4124
What I know is that amino acid has side chain, amine groupe ,and  groupe of carboxyl so what make them difference is side group where the is 20 different R-group which give each individual characteristics 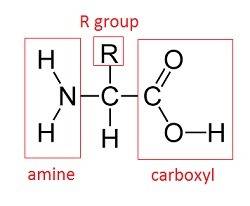 Another question on Biology

Biology, 22.06.2019 14:30
Is genetic diversity the same as genetic variation?
Answers: 3
Answer
You know the right answer?
Desribe the structure of amino acids including what makes amino acids different from each other...
Questions

History, 05.02.2021 23:10
What options are available to the President if he disagrees with a bill presented for signature, following its passage by both chambers of Congress?...

English, 05.02.2021 23:10
Which sentence has an inappropriate shift in number? After the boy moved to a new school, he was eager to make new friends. The children swam hard at...
More questions: Biology Another questions
Questions on the website: 11975833